The Alambre resortera aka Wire Coathanger Slingshot An urban street weapon for urban warfare and hunting smallgame, the ultimate improvised survival weapon.
What could you make if all you had were two coathangers and some black electrical or duct tape, some scrounged leather from either an old belt or old leather boots and a bag of office rubberbands? Read on and discover a nice DIY slingshot.

The Alambre (wire) slingshot is synonymous with the street kids or Barrio Kids in my case as I was raised in a Barrio in the Greater Los Angeles area. It is also the favored slingshot of rioters who need to make a quick and effective slingshot.

The wire frame slingshot in this case wire coat hanger slingshot: is not uncommon to many parts of the world, it is not a unique phenomenon to any Country as it has been seen on both hemispheres yet as styles vary this essay is dedicated to the Mexican Resortera de alambre or Mexican style wire frame slingshots. The wire slingshot is pretty old and was already quite common in the 1930s. For the sake of illustrational reference I will refer to the wire coat hanger slingshot simply as the alambre slingshot or alambre resortera.
The alambre slingshot is a commonly known slingshot in various parts of Mexico and I first heard of its use by my maternal grandfather, as there are two variations: There is a smaller version of the alambre slingshot which simply uses one hanger to make a small fork which uses nothing more than a few rubber bands and the rest of the wire from the hanger is the ammo for this simplistic design. My grandfather said that he used this simplistic alambre slingshot to control mice in the home when he was a kid.

The other alambre slingshot is more sturdy and capable of holding more powerful slingshot bands to shoot stones, marbles and of course lead and steel shot. This kind of alambre slingshot was first mentioned to me in conversation by a kid from Baja Mexico over 25 years ago and his story was all I knew about its construction. Later I saw one of these Alambre Resorteras professionally made and being sold in a Resortera Puesto slingshot stand in a small pueblo Yahualica on the outskirts of Jalisco Mexico.

I carefully examined its construction, because I was still a kid when I saw it my father wouldn’t buy it for me because he was die hard natural forks and thought it a waste of his money although it was inexpensive. But the image of that alambre slingshot was burned into my mind and with what I was told of their construction and what I saw gave me enough info to make my own. As I started to experiment with these alambre slingshots, later I would run into other people from different parts of Mexico who also made these alambre slingshots from these conversations I would gain more feedback on their construction.
Some important notes about the alambre slingshot, some people like to place a piece of wood in between the handle part of the frame, which is good because it lends support to the fork. Another style the one presented here relies on carefully bending and twisting the wire into a handle and fork, which is later wrapped in either electrical black tape or another wrapping of your preference. I normally use black electrical tape. The strength of these forks largely depends on the gage of the wire coat hanger, as is noted wire coat hangers exist in different thickness or gages. In times past thicker hangers were not so uncommon, now you must order these or if you know someone that hangs drapes or other heavy material.
However this is about imrpovised slingshots with what is available and the pictured examples are alambre resorteras made from scrounged wire hangers. Slingshot bands for the wire coathanger slingshot? It is traditional and also most effective for attachment and fork frame tollerances that the wire coathanger slingshot uses chained office rubberbands. In the 1980s the most common rubberbands I used were the red #32 rubberbands as I could even get these for free from the mailman and or the news paper courier.
They looked something like this and this is one I made two years ago. A portrait of the classic rubberband set-up
In current times these red #32 rubberbands are not common and are of all places only available through rubberband gun supply stores. 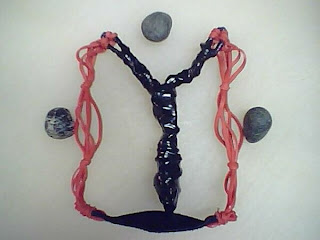 Shooting method: These forks are always held with index finger and thumb support, flip style is the most effective with the alambre slingshots.
With time I have come to by need and practicality optimize the basic design and have made the fork frame shorter and more compact and I have eliminated or greatly diminshed  the abraision problem by using black duct tape in the fork holes as the tape is softer and add a dash of talcum to keep the abraision to a minimum. As in the photo of my profile that is a shorter form of this alambre resortera.

As I wanted to keep this simple street weapon practical I opted for another classic chained band. I started using the ever present #64 office rubberbands available in virtually all office supply stores.  What I did was make a chain of the #64 rubberbands in a 3x3x3 chain  and this is the end result, mind you a picture of a well used alambre resortera. 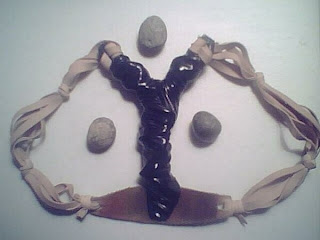 In this configuration the notorious Alambre Resortera aka Wire coathanger slingshot is a perfect pocket sized hunting tool.

This type of slingshot is always shot with the finger support.

How effective for hunting is this simple device? It has been field proven to be highly effective on small game ranging up the size of a large Desert Hare.

I have effectively harvested cottontail rabbits with nothing more than stones with this kind of slingshot at 15 yards and I have taken large pigeons with stones at this distance and I did take a large Jackrabbit at 30+ yards with a hand cast .50 cal lead ball a friend donated to me and I took the hare on the second shot and at that I was using the highly inexpensive #64 rubberbands I purchased from Walmart.

Keep in touch as I am working on a tutorial for the creation of this the ultimate DIY slingshot hack created with wire hangers and office rubberbands.

Best of luck in your slingshot pursuits and remember you dont have to spend insane amounts of money on a pretty slingshot and still be able to harvest small game if that is your inclination.

Forums and websites to visit for slingshots and honest review

This is my first blog entry and I feel it needs to be said as the interest of Slingshots becomes more popular with the information super highway (internet) being the main source new comers and old enthusiasts alike often search for websites and forums to visit to share their passion for slingshots.

Websites:
First of all one of greatest if not only (active) websites to exist online about slingshots with an unbiased attitude is Melchior's website a great website and the man is very honest and enthusiastic about the entire subject of Slingshots. http://slingshot-shooting.de/index.html

Updated address for Mel's website: Again thank you Melchior for adding my blog to your links list

Mel,
I really enjoy your essay Power, a very honest view of the whole "powerful slingshot fad" I agree with you power is relative in a slingshot.

I know no other fully active websites of slingshots and if I missed something please let me know.

Forums: While I'm not active in very many forums I think it goes without saying that eventually you will want to interact with others in your slingshot pursuits.

I belong to only two forums at the moment.

Hunters and target shooters are welcome in this place as we all have the same thing in common The love of slingshots.  http://rebelslingshotforum.freeforums.org/index.php

The Poacher's Pocket: A UK based forum dedicated to country living and has it's fair share of Catapult/Slingshot enthusiasts. Both hunting and target shooters and talented slingshot makers as well.  Good place, peaceful atmosphere.


That's all for now