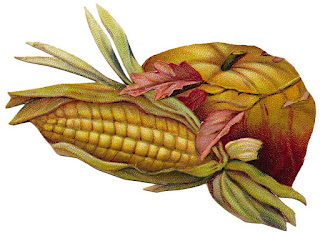 Warning and legal disclaimer: This blog post is about sharing hunting traditions from the various parts of our Great USA. It is exploring past traditions, sharing their practices for this Autumn season and showing the younger generation that hunting to fill the pot (to eat) is not about the killing an animal for bragging rights or to pretend you're the great white hunter.

This blog post does not encourage the reader to pursue potentially protected bird species in your respective state. As always check your state laws before pursuing any small game species and for God's sake please make sure it really is a pest causing depredation to your property. Don't just shoot the poor critter because you think its an invasive and you encountered it in the wild and think you are doing your part rid the habitat of these invasive species.

Remember some of these animals have thrived despite mass eradication campaigns by our great government and its doubtful you will save the eco system with a handful of marbles and your slingshot.

On the other hand you can always become a part of the food chain and encourage others towards a healthy approach to hunting. 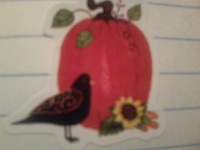 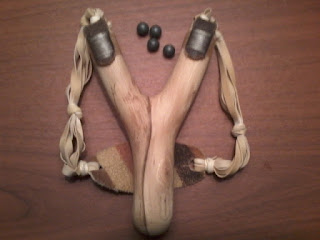 This blog post was inspired when I was helping my wife to put together Halloween and Autumn Harvest greeting cards, my dear wife had various decorative stickers that she likes to put on the outside of the envelopes.  In these various stickers I found two images that inspired me to do some of my own research. I have always said that Art is very often an expression of life i.e. "art imitates life" etc. I found a harvest pumpkin that had a curious looking blackbird and it had some red lines in its wings, another sticker had a solid blackbird next to a harvest basket of apples.
This made me wonder? Was the artist in their clever way sharing with us something that is not so accepted in our modern day?
We live in a time of drive thru fast food and the internet and many modern conveniences that the younger generations have taken their own history for granted.
Yet here in art work there is a possibility of a tradition from the past!
I did some research and my diligence paid off as I found several references alluding to a tradition of hunting Blackbirds during the harvest season to be eaten as food.  Yes you heard it right hunted as a food source.
Traditions born of necessity 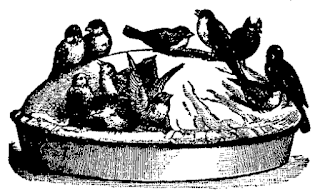 The first thing I did was look into black birds with red wings obviously the red wing blackbird was the first to come forward and in my search I read that these birds are often an agricultural pest due to their fondness of grain and that during the Harvest season these blackbirds and other blackbird species were/are  known to raid the grain where rice fields are, or the corn fields in the Midwest and this is where there is a strong tradition.
It is not uncommon from times past for farmers in the states where the most grain is farmed to have controlled these raiding blackbirds during the harvest season and use these very birds as a food source. In essence this was double harvest for a poor farmer in times past when food was more scarce. Noted is the fact that many farmers probably used a scatter gun to mass control/harvest these blackbirds.
But let us not forget that kids growing up on a farm in a poorer era would have been using a slingshot to help their parents control some of these blackbirds and these too were contributed to the pot.
Further evidence to a tradition of slingshot hunting blackbirds for food is found in an old Backwoodsman Magazine article in which a contributor by the name of Jackie Clay wrote that she'd hunted blackbirds with a slingshot to fill the pot.
Notably in my youth in rural Mexico there were times when I was walking with my grandfather and we came across a "chanate" a species of blackbird in Mexico that was sitting on the edges of Grandfather's Maize field which he told us to shoot the birds.
I remember him telling us to save them for food as they were good and we ate these in a game medley of birds mixed in a Salsa made from tomatillos and hot peppers and fresh corn tortillas made in Native style on a metate. Was a tasty stew from what I remember.
I found a recipe for cooking Blackbirds written by a man in his 70s I believe and he said he ate these blackbirds quite often as they killed many in the harvest season and that they were just as good as any other bird.   Here's a link to the recipe http://www.justapinch.com/recipes/soup/other-soup/black-bird-and-dumplings.html
I also found an old recording from an interviewee in his 90s which was recorded in the 1970s an old railroad man and farmer recalling his early childhood in the late 1800s.  The link to the recording is found here http://avbarn.museum.state.il.us/viewclip/1778
Even on the other side of the Pond in the 1600s we have accounts of poor country folk in rural England that would "poach" Rooks roosting in trees with the ancestor of our slingshot the stone shooting crossbow. 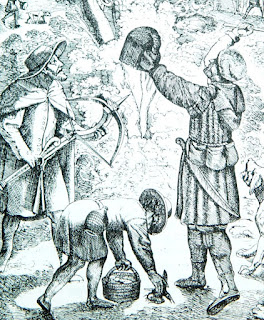 Although not a true blackbird the grackle is in some states allowed to be hunted year round and would be among those grain raiders in the harvest season. If you live in a place where these interesting birds are legal to hunt/control then I consider this as a possible quarry to harvest with your slingshot this autumn season. A side of blackbird n dumplings to go with some pumpkin pie is as good as having chicken n dumplings and you have harvested something from the wild as opposed to buying a chicken that was slaughtered after living its life in a box to became a package of meat for the uninformed consumer who has no connection to his or her natural world.  If you need recipes for these un touched birds there are many ways to make these.
As a kid we ate birds that were even smaller than these blackbirds, in Rural Mexico we often harvested a lot of ground doves aka inca doves and with a half dozen to a dozen of these taken in a team effort our aunt of grandmother would make use a tasty meal for the family.
My point is clear we as hunters owe the earth some gratitude for its  many gifts and with this Autumn season and Harvest Thanks approaching we should embrace these traditions and not over kill the rest of our natural resources and accept graciously what nature offers and allow the rest of her resources to replenish for us to enjoy in another season.
On behalf of myself and my family I would like to wish my readers a happy Autumn and always a Happy Harvest season.
Credits:
Thanks to my wife who inspired this Autumn blog post.


Special thanks to Jamie Pleasant for the tabbed natural slingshot pictured with .44 caliber lead balls he cast himself.
A thank you to the Audio-Video Barn of the Illinois State Museum for their audio interview of the 1970s man in his 90s account of eating blackbirds in the late 1800s
A warm thank you to the man who shared his family recipe for Blackbird n Dumplings.
﻿
Posted by Nico at 7:47 AM 1 comment: