Old Time Slingshot Elastic of Mexican tradition: a tribute to the round solid elastic

A tribute to  a  Classic Mexican Slingshot elastic: The round solids of Resortera fame.

Warning Some hunting images are depicted of small game harvested with a slingshot, if you do not agree with hunting then stop reading.  This is a hunting oriented blog, you have been warned.

Most American slingshot enthusiasts are all by now well familiar with the old time slingshot elastics; such as the old red inner tube rubber strips, the old time chained rubber band bands and the use of large rubber bands.
That there are other old time and underestimated or even overlooked slingshot elastics is an undeniable fact. However it may be that these elastics are overlooked by younger generations of slingshot enthusiasts who seem to believe that if their elastic does not come from exercise bands cut with a pizza cutter or purchased from an internet slingshot vendor that they do not have credibility as such? By all means read on as this blog is for those who love all the old time slingshot traditions.

The round solid elastic for lack of better term is just that a solid round as in round like surgical tubing but without a cavity they are a solid piece of rubber. They have been in use for a long time in Mexico possibly existed in the 1960s or earlier which I learned  after some conversations with some men in their mid 60s who used this elastic in their childhood. and at one time I believed that this round solid elastic had come into use at the beginning of the 1970s in Mexico but I was wrong they are much older in their use and distribution throughout Mexico.

Take a look at these images you can see they are simply a solid rubber cord. 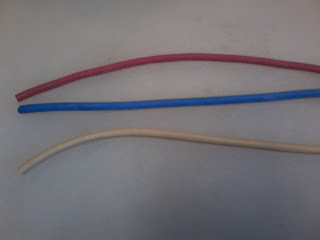 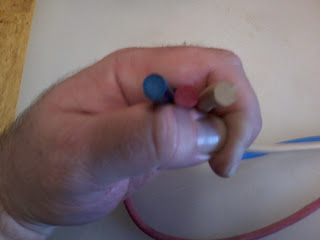 These solids were sent to me via trade with a friend in Mexico and they are what the current solid rubber is like, yet they are not by any means all the types of solid elastic available as there is a beige elastic I could not get that  was the first slingshot elastic I ever used as a kid to hunt with.  I have not tested the blue solid elastic yet, but I have chronograph tested both the red solids and the cream colored solids. The red elastic in the picture I am familiar with and was a favorite when I was in my pre teens in the 1980s. The red solid elastic gave me a reading of 150 feet per second with a 16 mm lead ball! Yes you read it right a heavy 16 mm lead ball traveling 150 feet per second. These round solid elastic bands in the picture are approximately 7mm in diameter slightly thicker than 1/4 inch.
The cream colored resortes (elastic) in the picture have about the most common power expected of the round solids, they can fire an 18 to 20 gram river stone aka pebble at 148 to 150 feet per second plenty of stopping power for hunting small game. It also fires 12 gram 23 mm clay balls at 168 fps, the cream colored solids have the same strength of the old beige round solids I used as a kid.
In my childhood I killed my fair share of small game with the round solid elastic powered slingshots my uncle mentored me to use while we stayed summers in rural Mexico. I also saw some very skilled slingshot hunters in action with these old elastics, my uncle the same man who taught me to build chained rubber band bands was himself an adept user of the round solid elastics he always came home with a rabbit or a few quails and doves that he took with his round solids resortera and stones for ammo.
When I was cut off from Mexico and back in my native concrete jungle of Los Angeles county when summer was over and school began I would use whatever I had left of my round solid elastic supply which when exhausted I'd return to my use of the chained bands like usual.
My last time enjoying the round solid rubber for slingshots was at the age of 19 years old. That was 19 years in the past and now through some help from a friend in Mexico I have been able to relive some of my past adventures with these old time elastics.
Present time: The self challenge

This past July of this year I made myself a traditional resortera of a seasoned magnolia fork. I gave it some classic spirals as are seen in both wood and plastic classic Mexican resorteras and I tied it lashed down with an insulator and rubber bands in this way you draw the bands pulling against the ties. I used the cream colored round solids in the previous pictures. 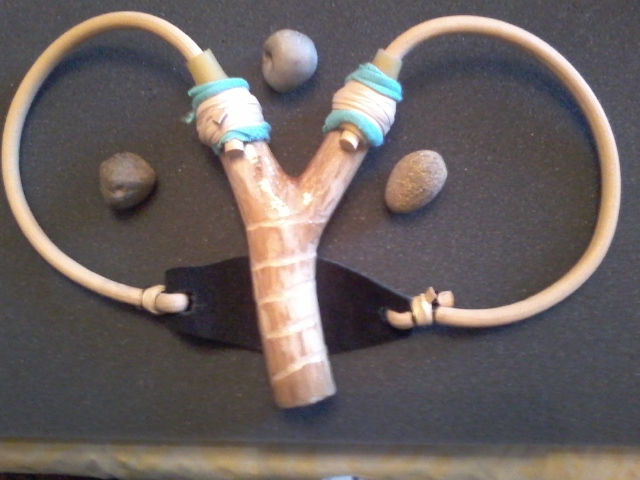 I decided to hunt with this slingshot to remember the challenges I faced in the years gone bye and to remember how challenging it is to hunt with these old time slingshot elastics. In July I struggled with my accuracy which after I examined the slingshot I realized that there was a noticeable difference in the pull force between the two slingshot bands. These irregularities are not uncommon in all types of rubber. Well I re-banded the resortera with a fresh set of round solids who's pull force was evenly matched. Still my busy work schedule eluded me from being able to hunt regularly and give the old time resortera elastic a fair chance.
This all would change in early August:
A slingshot hunter's tale
I had equipped this slingshot with various projectiles, namely pebbles for rabbits and I made some slightly heavier clay balls for pigeon hunting. These were 23 mm clay balls that weighed about 12 grams so had more weight to them.
I had been far too busy with work to have a proper go at hunting. Well my work place has game too, so I took my resortera to work one weekend and some of the larger clay balls for pigeons.
It was a Saturday around 1 pm I went on the forklift scouting for pigeons or a jackrabbit laying in the shade.
Towards the harvest bin area I saw one pigeon sitting across from the harvest bins. I tried to walk towards it to take a shot at it. It flew right to the harvest bins, well I drove there with the forklift and realized the pigeons were not flying when I was on the fork lift. So I decided to try and shoot while on the forklift, 10 yards away and 10 yards above stood this large male pigeon strutting or showing is superior pose and it lifted it's head high so I got a good sight of it's neck.  I calmly drew back and focused on the neck of this large pigeon and let my projectile fly, the clay ball impacted directly on it's neck.

The pigeon fell stone dead without a twitch, I had to use the forklift to get to this pigeon as it fell inside the wooden harvest bin and after a while I retrieved my trophy and man what an impressive bird and the shot was as perfect as I have ever made.

Do these old time slingshot elastics have the power to fill the pot? See for yourself! 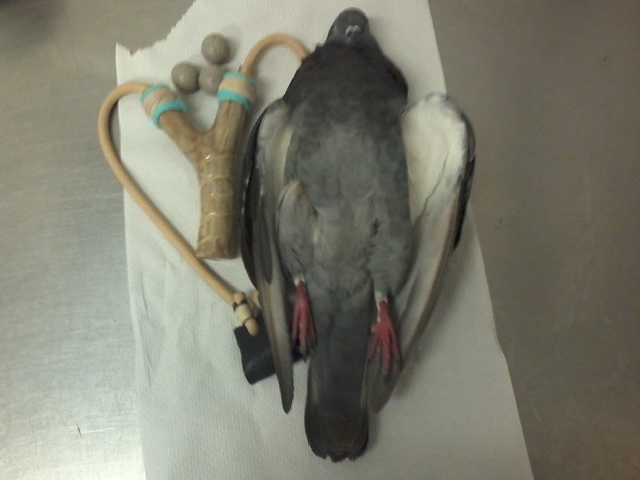 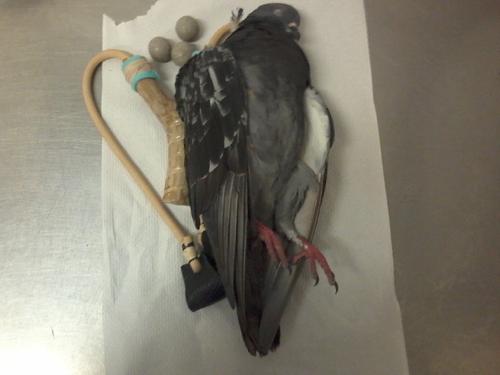 For the record this large agriculturally fed male pigeon after being DE feathered and gutted and cleaned for the freezer weighed 8.5 ounces of meat that's breast, wings and legs! Now that will make a fine stew! That's more 1/2 of a pound of meat harvested with a primitive old time slingshot rubber and one well placed 23 mm baked clay ball.

I'm certain that sometime down the road there will be more small game harvests at the end of this old time slingshot elastic. In the meantime I will revisit my hunts with my favorite chained elastics and carry this round solids resortera as it's back up and maybe sometimes use it as a primary hunting slingshot.


It's been great reliving the past hunting adventures with this old time slingshot elastic. Special thanks go out to my resortera brother Xidoo for helping make this resortera adventure possible.


Happy hunting and remember not all slingshots are powered by the exercise bands of modern day.﻿