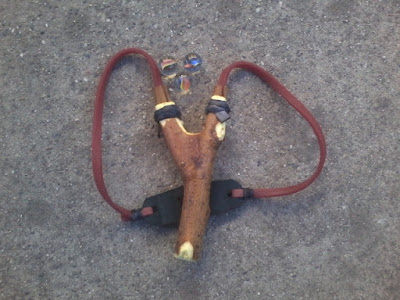 A slingshot's power to harvest small game..  What does it really take?

An exploration of traditional slingshot elastics and classical yet underestimated slingshot projectiles for hunting small game, the truth will set you free.

In a few of my blog posts I have written on the mechanism by which a slingshot kills and its "killing potential being measured by the "poor man's chronograph the venerable soup or veggie tin can..

This veggie soup can test is on an old blog post I wrote four years ago, the link is here.


But I digress as this will more relevant later on in this post as it will better define the finer points of this blog post.


The Elastic in Question:

This blog post is about a traditional slingshot elastic that has been in use for generations and I feel is a close relative of the old time round solids I used in Mexico as a child.

Many know of the Famous Slingshot Master from Thailand as his videos have been on You Tube for a number of years now.


The elastic this man uses is native made in his country and it has been looked down upon by the target shooting guru types who draw the slingshot rubber to their cheek and "aim".  Shooting in this way some of these "experts" have stated that the Thai Native slingshot rubber is just too slow.

What I find ludicrous about such people and their one sided chronograph tests is that they only judge all slingshot rubber by using the same dead method of drawing slingshots when they shoot. A review of the above video show's the Thai Slingshot Master and others in his native country using a different method of shooting than our Tournament flat latex and theraband preaching target shooter gurus.

In the videos you can see the Thai slingshot master and other natives shoot these simple solid elastic with power and deadly accuracy with simple stone projectiles. Certainly not the slow weak report of the tournament flat latex gurus.

I always wondered if I would ever get my hands on some of this Thai Elastic..

Some time ago my good friend Jmplsnt Administrator of the Rebel Slingshot Forum and a very good slingshot hunter in his own right, gave me some samples of Thai Native Slingshot Elastic to experiment with. He found a good source over seas to order the elastic from.

The slingshot in the beginning of this blog post is a resortera I made with the Thai solid elastic and ran some Chronograph tests with.  What I discovered in my Chrony tests is that the Thai solid elastic can develop and did shoot 5/8 cat eye marbles at speeds of 170 to 175 feet per second at the high side but an average 170 feet per second was the norm  with the Thai elastic and 5/8 marbles.

However I did minor hunting with the slingshot and the Thai elastic which mean that the full in the field testing of the Thai solid elastic would remain in the hands of my good friend Jmplsnt.

Canicas aka marbles the most underestimated slingshot hunting projectile. 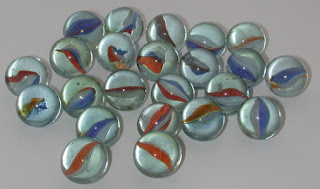 Around four years ago I wrote a blog post regarding different types of slingshot hunting ammo. That old blog post can be found here http://nicos-resorterablog.blogspot.com/2012/10/being-prepared-hunting-ammo.html   On it I mention Canicas "marbles" as a great ammo for bird hunting and I still stand by this and I also mention  that marbles are very capable of killing other game like rabbits if you are confident in your accuracy. Since then I have killed my share of rabbits with marbles so I know if you are careful and good with your shot placement that 5/8 cat eyes or clear marbles and also better 3/4 marbles will all kill rabbits.

Some notes: 5/8 glass marbles weigh approximately 1 or two grains difference from a 0000 buck shot otherwise known as the .380 lead round ball.

This is something I mention in my blog post

They work along the lines of what I coined the Blunt Trauma Formula this is a section from my old blog post.

In the case of the 5/8 marbles they have a large striking surface and being glass are very hard they may only weigh 77 grains which is slightly less than the .380 lead ball.  But due to their larger surface are suited to blunt impact. The next requirement is suitable speed to create the blunt impact trauma we need to harvest small game. Anything from 170 feet per second up to 190 is lethal with these marbles.

Note: I have killed large pigeons with elastics that only travel  170 and a 5/8 cat eye marble.

What does any of this have to do the Thai solid elastic?

Thai Solid Elastic and Canicas go on the Hunt

Some time back my friend Jmplsnt had told me he was going to try and use the 5/8 cat eye marbles to take some Squirrels.

That's right Squirrels..  Not with therabands not with tubes nope.

The man stayed true to his self challenge and decided to use some cat eye marbles he picked up at the dollar store and his deer antler slingshot "Herne the hunter" armed with Thai Solid Elastic to see for himself if he could bag some squirrels with this dynamic duo.

I encouraged my friend to go for it as I felt it would be promising and this is what my friend had discovered.

That a canica propelled by the Thai Solid rubber traveling at approx. 170 feet per second is absolutely lethal to a fox squirrel from 12 to 16 yards and the man was generous enough to provide with some old pictures of his body of work in this field.  He reports that on both occasions they were perfect head shots and each took only one shot with a very clean kill. 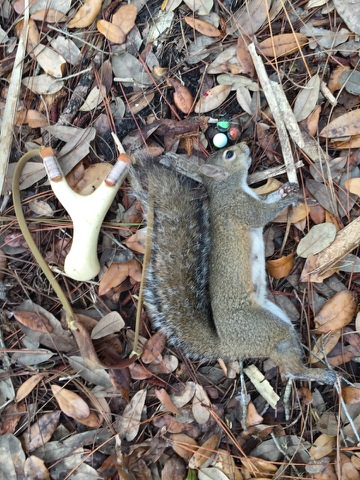 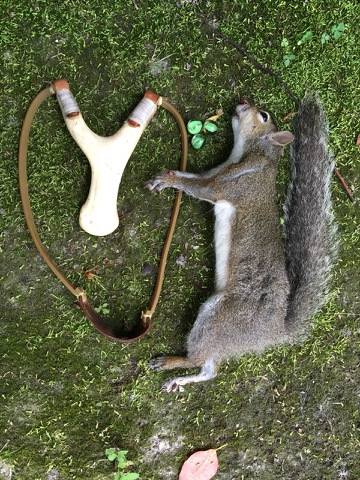 Yes these squirrels were harvested with a simple solid elastic used by the natives of Thailand in daily slingshot use.


Used by my slingshot hunting brother in arms Jmplsnt..

What have we learned from all of this???

That it takes a 5/8 glass marble to travel 115 miles per hour (170 fps) the momentum it requires to make the blunt impact trauma to take a critter as tough as a Fox Squirrel.

We have also learned that the Thai Solid Rubber is more than adequate for hunting small game with a slingshot just as long as you (and I'm borrowing a term from our good friend Frogman) tax the rubber that is draw it enough to generate speed then it will do the work required of it.

And that there are other ways of shooting a slingshot than the draw to the cheek business used by some of the folks out there (nothing against it) but it does not work some types of elastic.

I want to take this time to thank Jmplsnt for his contribution to this blog post because of him this Collaborative Blog Post was  made possible.

Good will to all Slingshot Hunters and as always good luck on your hunts.